The Solution below shows the F minor triad chord in root position, 1st inversion and 2nd inversion on the piano, treble clef and bass clef.

This step shows the F minor triad chord in root position on the piano, treble clef and bass clef.

The chord spelling / formula relative to the F major scale is:  1 b3 5. 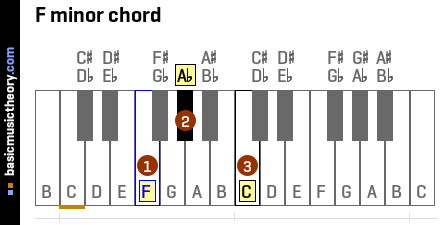 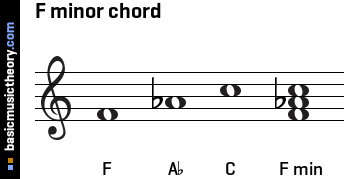 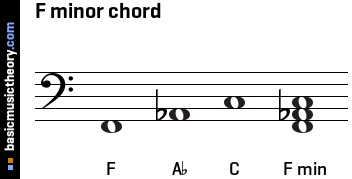 This step shows the F minor 1st inversion on the piano, treble clef and bass clef. 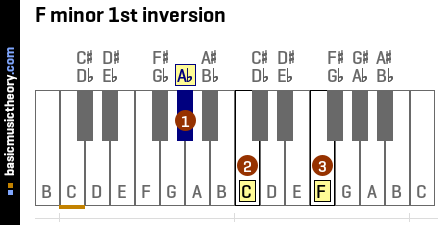 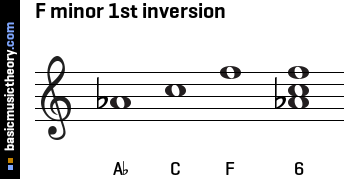 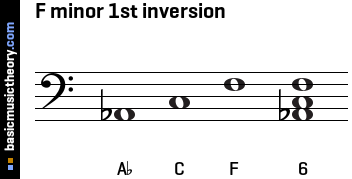 This step shows the F minor 2nd inversion on the piano, treble clef and bass clef. 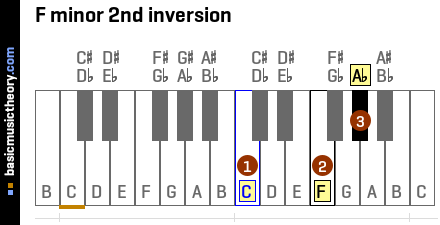 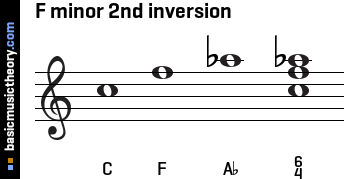 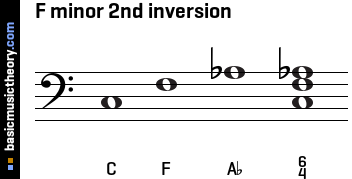 This step shows 1 octave of notes starting from note F, to identify the start and end notes of the scale used to build this chord.

Note 1 is the root note - the starting note of the chord - F, and note 13 is the same note name but one octave higher.

This step describes the F major scale, whose note intervals are used to define the chord in a later step. 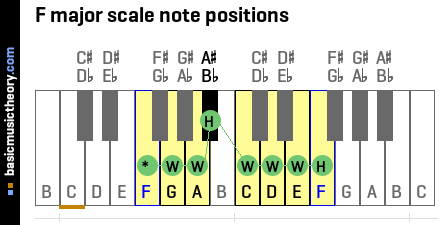 To understand why the note names of this major scale have these specific sharp and flat names, have a look at the F major scale page. 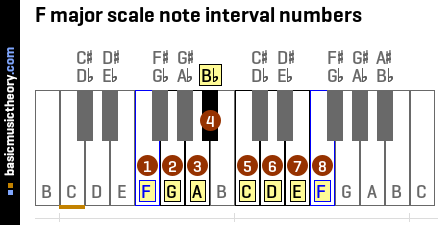 The steps below will detail the minor triad chord quality in the key of F.

Looking at the table above, the note intervals for the chord quality we are interested in (minor triad), in the key of F are F-min-3rd and F-perf-5th.

For this chord, this is explained in detail in F-min-3rd and F-perf-5th, but the relevant adjustments for this minor chord quality are shown below:

F-3rd: The 3rd note quality of the major scale is major, and the note interval quality needed is minor, so the 3rd note scale note name - A, is adjusted 1 half-note / semitone down to Ab. The chord note spelling reflects this note flattening: b3.

F-5th: Since the 5th note quality of the major scale is perfect, and the note interval quality needed is perfect also, no adjustment needs to be made. The 5th note name - C is used, and the chord note spelling is 5. 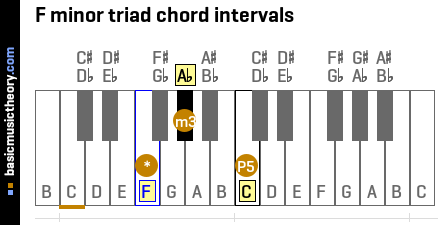 In music theory, this triad chord as it stands is said to be in root position because the root of the chord - note F, is the note with the lowest pitch of all the triad notes.

So another name for this chord would be F minor triad in five-three position.

For example, the 5 represents note C, from the F-5th interval, since the triad root, F, is the lowest note of the chord (as it is not inverted).

In the same way, the figured bass 3 symbol represents note C, from the F-3rd interval.

This step shows the first inversion of the F minor triad chord.

So for a 1st inversion, take the root of the triad chord in root position from the step above - note F, and move it up one octave (12 notes) so it is the last (highest) note in the chord.

The second note of the original triad (in root position) - note Ab is now the note with the lowest pitch.

Based on this numbering scheme, another name for this inversion would be F minor triad in six-three position.

For example, the 6 represents note F, from the Ab-6th interval, since the lowest (bass) note of the chord - now inverted, is Ab.

In the same way, the figured bass 3 symbol represents note C, from the Ab-3rd interval.

This step shows the second inversion of the F minor triad chord.

For a 2nd inversion, take the first note of the 1st inversion above - Ab, and move it to the end of the chord.

So the second note of the 1st inversion - note C is now the note with the lowest pitch for the 2nd inversion.

Based on this numbering scheme, another name for this inversion would be F minor triad in six-four position.

For example, the 6 represents note Ab, from the C-6th interval, since the lowest (bass) note of the chord - now inverted, is C.

In the same way, the figured bass 4 symbol represents note F, from the C-4th interval.