There are 4 different main qualities of triad chords - major, minor, augmented, and diminished.

Each chord differs by the 2nd and 3rd notes as shown below.

An augmented chord is usually shown with a plus symbol:    +

A diminished chord is usually shown with a circle symbol:    o

Each quality has a different musical flavour, but they all share the same starting note, or root, for a given key.

For example, the Eb major scale has note Eb as the tonic / starting Note, so Eb is the root note of all triad chord qualities in this key.

The 2nd and 3rd notes of all triad chord qualities above are based on variations of the 3rd and 5th notes of the same major scale (eg. notes G and Bb for E-flat). For example:

The Eb major chord uses these 3rd / 5th note names exactly as they are, with no adjustments.

The Eb minor chord uses the 3rd that is 1 half-tone / semitone / piano key lower than the major quality, so the 3rd note is Gb instead.

The Eb augmented chord uses a 5th that is 1 half-tone / semitone/ piano key higher than the major quality, so the 5th note is B instead.

The Eb diminished chord has both a 3rd and 5th that are 1 half-tone / semitone/ piano key lower than the major quality, so those notes are Gb, Bbb respectively.

To understand why this note is called Bbb, but it is occupying the note A position on the piano diagram below, have a look at the Eb diminished chord page, which explains how note intervals are used to name the individual notes.

The note intervals for the Eb diminished chord are Eb-min-3rd and Eb-dim-5th, whose names are abbreviated on the piano below as m3 and d5. 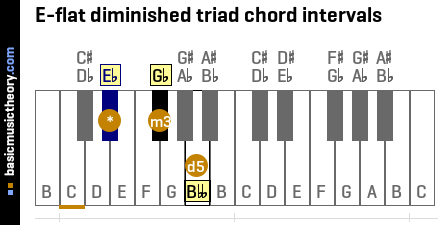 Unlike all of the triads above, suspended triads do not use the 3rd scale note, so it is not possible to classify them as either major or minor. Instead they use either 2nd or 4th note.

So the Eb suspended 4th chord is identical to the Eb major chord except the 2nd note (a major 3rd) is replaced - suspended, in favor a perfect 4th - note Bb.

The Eb suspended 2nd chord is identical to the Eb major chord except the 2nd note (a major 3rd) is replaced - suspended, in favor a major 2nd - note F.

The order of the notes in a triad chord as described above have the root note Eb as the lowest / first note of the chord. This is triad in root position.

By moving the root note up one octave to the end of the chord, the 1st inversion of that triad is created, which now has Gb as the first note in the example above.