Note Names
CC#DbDD#EbEE#FbFF#GbGG#AbAA#BbBB#Cb
This page is an overview of how sharp and flat note names are organized on the piano, for both white and black notes.

The example on the piano diagram below shows the Eb note highlighted. 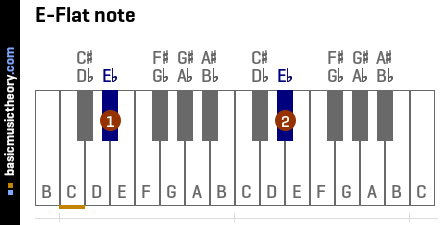 From the piano diagram above, you can see that all black notes have two possible names - a sharp and a flat name.

The choice as to whether a black note takes the sharp or flat name depends on the scale or chord being constructed that uses that note.

But crucially, these two notes sound the same - it is just the note names that are different.

In music theory, it is said that these two note names are enharmonic to each other.

The white notes are shown with a single note name from A to G, with no sharp or flat signs. They are called natural when they do not have to be sharpened, or flattened when constructing a scale or chord.

Be aware that white notes can also have sharp or flat names.

For example, white note C, when flattened, becomes note Cb, which has the same pitch, and is actually note B that is being played on the piano.

Again, depending on the scale being constructed in a particular key, either name could be used.

For example, note name B is used when constructing the D major scale, but this pitch / sound is called Cb when used to construct the Gb major scale.

In the same way, when note E is sharpened for use in a scale, it is called E# which occupies the F white note position.

Or when note F is flattened, it is called Fb which occupies the E white note position.

Finally, when note B is sharpened, it is called B# which occupies the C white note position.

When constructing scales, it is theoretically possible for a note name to have a double sharp, that is adjusted by 2 half-tones / semitones / piano keys up or down.

Given a pair of enharmonic scales with identical pitches, it makes sense to use the scale that has the fewest sharps and flats.

When constructing chords, it is even possible for a note name to have a triple accidental, that are adjusted by 3 half-tones / semitones / piano keys up or down.