Given any mode in any key, it is possible to work out a set of triad (3 note) or 7th (4 note) chords that harmonize with that mode.

These chords sound good played underneath the notes of a given mode because they are made up only from notes in that mode.

In fact, for each note of the mode there is a corresponding triad and seventh chord that whose root ie. starting note, is that mode note.

As an example, let's use the phrygian mode shown below. 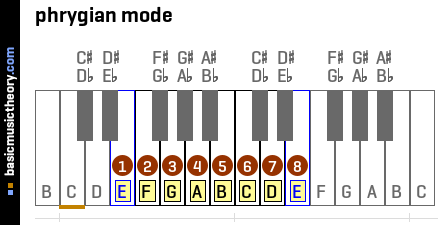 Chords based on 1st mode note - the tonic

Triad chords are built using the 1st, 3rd and 5th notes of a mode so the first triad is constructed using notes E, G and B.

Seventh chords are built from triads, with one extra note - the 7th mode note.

Chords based on 2nd mode note

The 7th chord has the same notes, plus one extra note - the 8th mode note, which is the same note as the original tonic of the mode.

Chords based on 3rd+ mode note

This process is repeated for the remaining chords - just move up the next mode note, make it the root, and calculate the 3rd, 5th and 7th mode notes above it.

Although at this point it appears that we have hit the the 'end' of the mode (note 8), the mode just repeats itself, so note 9 is the same as note 2 - note F, and so on.

So the 3rd chord's root is G, and the remaining triad notes are a 3rd above that - B, and D.

That was quite easy - all we did was skip each note of the mode to identify the next chord note.

The trickier bit is to work out the name of the chord we have created in each case.

Based on the notes we have in each chord, should the chord quality be major, minor, augmented, diminished, or something else ?

That depends (on a chord by chord basis) on the Note interval relationship between the root and the other chord notes.

More on these interval relationships are at Triad chord and Seventh chord, and the links at the top of this page describe, for a given key, these chords in detail - the notes to use, and the chord quality name.

The remainder of the text below is a summary of all of that information laid out in a couple of tables - first for triads, then for seventh chords.

The chart below shows the triad chord qualities of the Triad chord for each of the 7 notes in the mode.

The Note no. row is the note number of the mode which we want to be the root (or starting note) of the triad chord.

The Scale degree row is a name given to that note number that represents its purpose in the mode.

The remaining rows show the triad chord quality names for each of the modes.

For example, for the bold table cell shown below, we are saying that the name of the triad chord name for the 2nd scale degree (supertonic) of the lydian mode is always a major triad chord.

Using phyrgian as the example mode again, we know that the 2nd note of this mode is F, so the name of the triad chord we want is the F major chord.

These chart rules always hold no matter which key the mode is in.

To understand the chord symbols ( o + ) used in this table have a look at Triad chord.

The roman numerals (i, ii, ii, iv, v, vi, vii) are used to identify the 7 chords in a mode. For example, it is common to see something like chord IV of the lydian mode meaning the 4th chord of the lydian mode.

Below is a similar chart for 7th chords - exactly the same rules apply as for triad chords, except that the chord qualities are taken from the Seventh chord chart instead.

To understand the chord symbols ( o + ø ) used in this table have a look at Seventh chord.