The Solution below shows the 2nd note intervals above note E#, and their inversions on the piano, treble clef and bass clef.

This step shows the E-sharp second intervals on the piano, treble clef and bass clef. 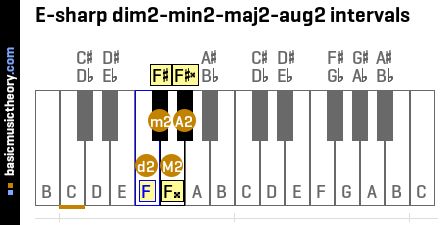 This table inverts the above intervals, so that each link in the last column leads to note E-sharp.

This step constructs the E-sharp major scale, which is necessary because all interval names in this key are calculated using this major scale as starting point.

The tonic note - E# ,shown with an asterisk (*), is the starting point and is always the 1st note in the major scale. 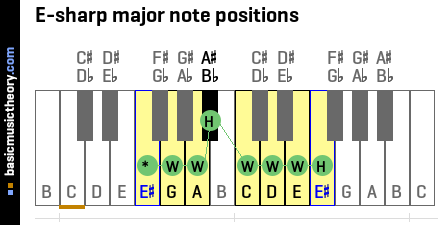 The table and piano diagram below show the 8 notes (7 scale major notes + octave note) in the E# major scale together with the interval quality for each. 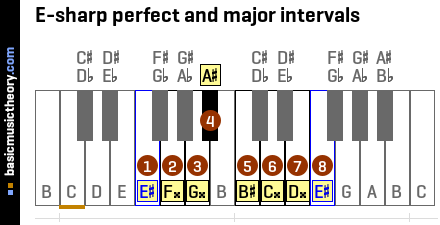 This rest of this page will focus on the relationship between the tonic note - E#, and the intervals surrounding the 2nd major scale note - F##, whose interval quality is major. So we will definitely see extra sharp or flat spelling symbols there.

This step identifies the note positions of the E-sharp 2nd intervals on a piano keyboard.

Having established that the major 2nd interval of the E# major scale is note F##, this step will explore the other 2nd intervals next this note. 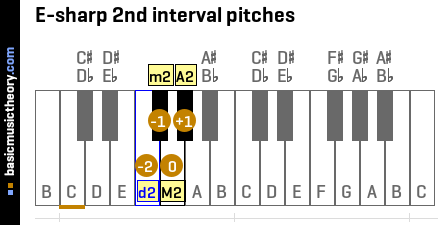 This step identifies the note names of the E-sharp 2nd intervals on a piano keyboard.

The major 2nd note name is F##, and so all intervals around it must start with the note name F, ie. be a variation of that name, with either sharps or flats used describe the interval difference in half-tones / semitones from any given interval note to the major 2nd. 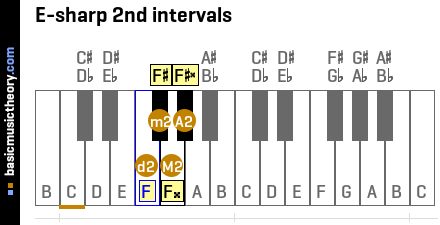 This step explains how to invert note intervals, then identifies the E-sharp 2nd inverted note intervals shown in previous steps.

For example, in the steps above, one of the intervals we measured was a major 2nd above E#, which is note F##.

In contrast, an inverted interval specifies the distance from F## to E# - ie. note E# is above note F##.