Keys
CC#DbDD#EbEE#FbFF#GbGG#AbAA#BbBB#Cb
This page shows an overview of the structure of the (natural) minor scale, with examples.

Natural minor scales contain 7 notes, and all use the  W-H-W-W-H-W-W  tone / half-tone pattern to identify the note positions.

So in the example below, we are interested in the minor scale in the key of E-flat.

Below is an example using the Eb natural minor scale. 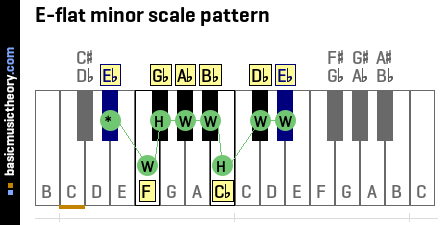 To learn about minor scales, start with the A natural minor scale, which has no sharps or flats, only white / natural notes.

In fact, it contains the same notes as the C major scale, but a different note is used as the starting (tonic) note in each case.

Then maybe have a look at the Eb natural minor scale as shown above, which contains 6 flats.

More complex still is the A# natural minor scale which has all 7 notes sharpened.

The All minor scales page contains piano diagrams and key signatures for all (natural) minor scales.

To understand the differences between the major and minor scale for a given key, have a look at any natural minor link on this page, which show the note differences for the specific key you are interested in.

To see the relationships between all major and minor scales on a diagram, have a look at the Circle of fifths diagram.