Keys
CC#DbDD#EbEE#FbFF#GbGG#AbAA#BbBB#Cb
This page shows an overview of the structure of the major scale, with examples.

Major scales contain 7 notes, and all use the  W-W-H-W-W-W-H  tone / half-tone pattern to identify the note positions.

So in the example below, we are interested in the major scale in the key of E-flat.

Below is an example using the Eb major scale. 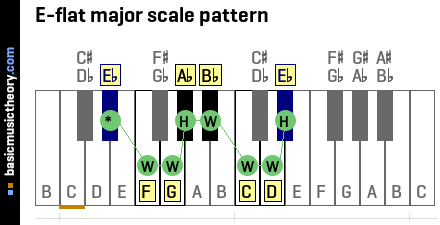 To learn about major scales, start with the C major scale, which has no sharps or flats, only white / natural notes, just to see how the note positions are identified.

Then maybe have a look at the Eb major scale as shown below, which contains 3 flats.

There might appear to be 4 flats above, but the 4th flat is just the octave of the tonic note, where the pattern starts repeating, so it doesn't count.