7th chords with 4 notes, including 1st, 2nd and 3rd inversions

Like triad chords shown in Triad chord, seventh chords have different qualities as shown in the last column of the table below.

Seventh chords are built on triad chord qualities, but with an extra note, whose name is based on the 7th note of the major scale.

> An augmented chord is usually shown with a plus symbol:   +

>A diminished chord is usually shown with a circle symbol without a line through it:    o

>A half-diminished chord is usually shown with a circle symbol with a line through it:    ø 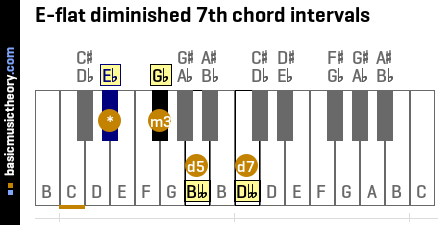 The piano diagram above shows the Eb dim 7 chord which is the same as the triad chord shown in the triad section above, except that it has one extra note, defined using the Eb-dim-7th note interval as shown in the first row of the table above.

Using the 7th chord above, the root position 7th chord has Eb as the first note.

For the 1st inversion, this note is moved to the end leaving note Gb as the first note.

For the 2nd inversion, Gb from the 1st inversion is moved to the end leaving note Bbb as the first note.

For the 3rd inversion, Bbb from the 2nd inversion is moved to the end leaving note Dbb as the first note.