Keys
CC#DbDD#EbEE#FbFF#GbGG#AbAA#BbBB#Cb
This page shows an overview of the structure of the harmonic minor scale, with examples.

To count up a W½ tone (whole-tone and a half), count up from the last note by 3 half-tones / semitones - shown as 3 in the piano diagram below.

So in the example below, we are interested in the harmonic minor scale in the key of E-flat.

The example below, Eb harmonic minor scale, uses the key of E-flat. 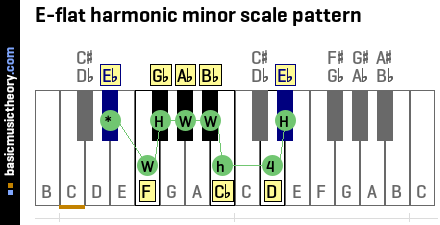