Keys
CC#DbDD#EbEFF#GbGG#AbAA#BbB
This page shows an example of a chromatic scale using all piano keys between the tonic and the octave.

Chromatic scales contain 12 notes, and include every note including the starting tonic note highlighted as the first blue note below. All white and black keys are used.

The 13th note (also in blue) is the same note name as the tonic note, but is 1 octave higher, and has twice the frequency of note 1. 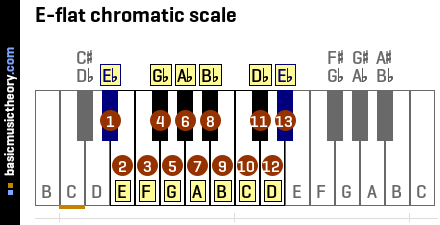