The Solution below shows the B blues scale, on the piano, treble clef and bass clef.

Since the key of B appears on the Circle of fifths diagram as both a major and minor key, the Lesson steps explain both ways of constructing this blues scale for this key:

This step shows the B blues scale on the piano, treble clef and bass clef. There are 6 blues scale notes plus the octave of the tonic note - a total of 7 notes.

The B blues scale has 1 sharp. 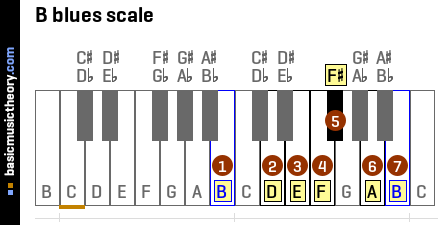 This step describes the B major scale , which is necessary to build the blues scale in a later step. 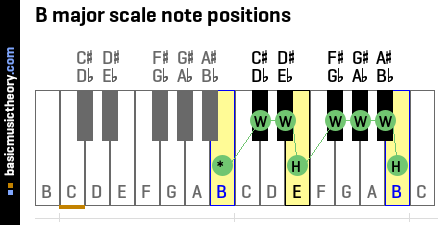 To understand why these sharp and flat note names have chosen given the note positions from the previous step, have a look at the B major scale.

5. B blues scale from the B major scale

This step shows the B natural minor scale scale notes, on which the minor pentatonic scale is based. 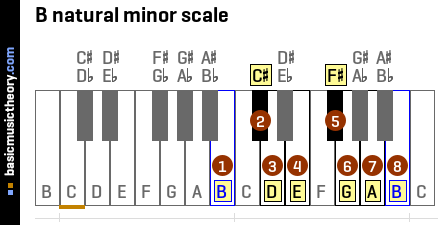 To understand why this scale has these sharp and flat note names, have a look at the B natural minor scale.

This step shows the B minor pentatonic scale scale notes, on which the blues scale is based. 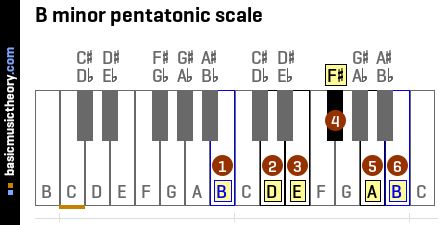 To understand why this scale has these sharp and flat note names, have a look at the B minor pentatonic scale.

8. B blues scale from the B minor pentatonic scale

Yet another (more complex) way to identify the blue note is to take the Diminished 5th note interval based the tonic note - B-dim-5th.