B major half cadence

The Solution below shows the B major half cadence on the piano and treble clef.

1. B major half cadence

This step shows the half cadence in the key of B major. 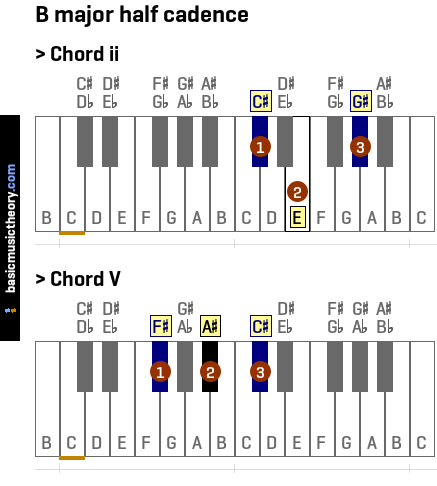 Before describing the details of the half cadence in the key of B major, first it would be to useful to identify the scale notes, degrees and chords that could be used in this key.

3. B major half cadence

This step shows the B major half cadence on the piano and treble clef.

It is less strong than the B major perfect authentic cadence, because it doesn't give the same sense of closure or completion to the phrase, since a music phrase will usually sound most complete when the tonic(I) is the final resting place.

This means that the half cadence is often used as a pause in a piece of music, which finally ends using the B major perfect authentic cadence.