The Solution below shows the B-sharp major perfect authentic cadence on the piano and treble clef.

This step shows the perfect authentic cadence in the key of B-sharp major. 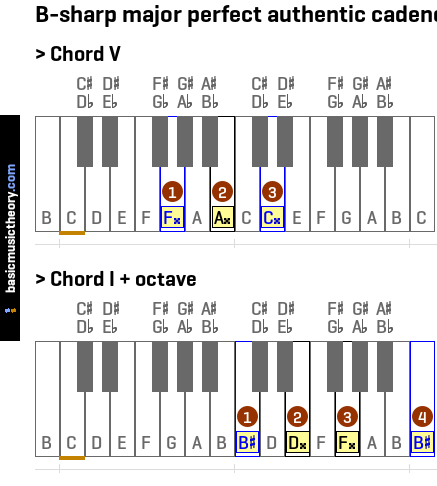 Before describing the details of the perfect authentic cadence in the key of B-sharp major, first it would be to useful to identify the scale notes, degrees and chords that could be used in this key.

This step shows the B-sharp major perfect authentic cadence on the piano and treble clef.

Or if chord V7 is used in place of chord V, we move from the B# major seventh chord #V7 - F## dom 7 chord to the B# major chord. To keep things simple, we will use chord V from now on.

However, perfect cadences also need to have the tonic as the highest note of the tonic chord (I) - B# major chord. As you can see from this link, the tonic chord notes are currently B#, D##, and F##.

At the moment, the highest note of the I chord is F##, so to make this cadence perfect, we will add the octave of the tonic note into the chord. This is note 8 of the piano diagram in the above step, and as note 4 on the piano diagram below.