The Solution below shows the Ebb minor scale notes, intervals and scale degrees on the piano, treble clef and bass clef.

The Lesson steps then explain how to identify the E-double-flat minor scale note interval positions, choose the note names, and scale degree names.

This step shows the ascending E-double-flat natural minor scale on the piano, treble clef and bass clef. It also shows the scale degree names for all 8 notes.

Warning: The E-double-flat key is a theoretical minor scale key.

> The D natural minor scale sounds the same / contains the same note pitches, which are played in the same order (the scales are enharmonic), so it can be used as a direct replacement for the E-double-flat minor scale. 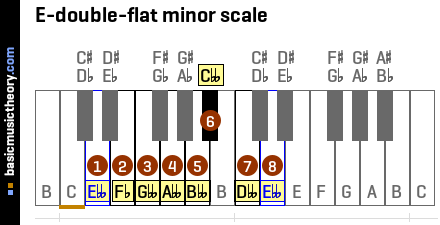 For the key signature of this scale, showing these symbols grouped correctly next to the bass or treble clef symbol at the beginning, have a look at the Ebb natural minor key signature.

The difference between the E-double-flat natural minor scale and the Ebb major scale is that the 3rd, 6th and 7th note positions of the major scale are lowered by one half-tone / semitone.

So whereas the Ebb major scale has notes Gb, Cb, Db for the 3rd, 6th and 7th notes, these notes are lowered to arrive at notes Gbb, Cbb, Dbb for this natural minor scale. 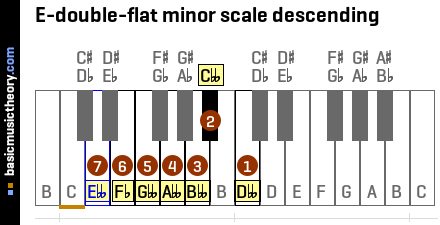 This step shows an octave of notes in the key of Ebb, to identify the start and end notes of the scale.

This step applies the minor scale note interval pattern starting from E-double-flat, so that the correct piano keys and note pitches can be identified. 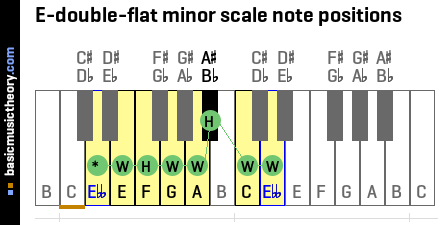 What is the difference between the E-double-flat natural minor scale and the Ebb major scale ? 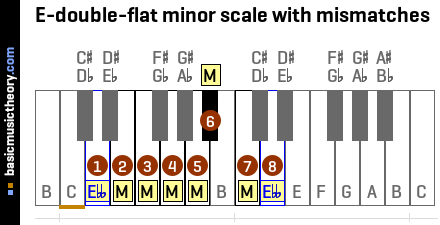 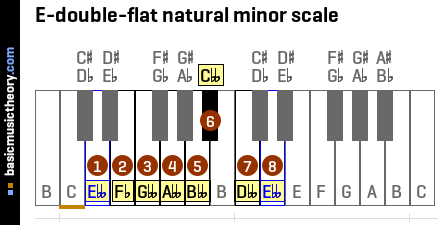 This step shows the notes when descending the E-double-flat minor scale, going from the highest note sound back to the starting note.

This step shows the E-double-flat natural minor scale degrees - tonic, supertonic, mediant, subdominant, dominant, submediant, subtonic, and tonic.
In music theory, each note in this scale has what is called a scale degree name, which describes the relationship of that note to the tonic(1st) note.

In contrast, the Ebb major scale has only one half-tone / semitone separating the 7th and 8th notes, and in this case the seventh note is called the leading note or leading tone, as the 7th note feels like it wants to resolve and finish at the octave note, when all major scale notes are played in sequence.

Both the Ebb harmonic minor scale and Ebb melodic minor scale scales share the same property - having a leading tone, with the major scale.