The Solution below shows the E# natural minor key signature on the treble clef and bass clef.

Warning: The E-sharp key is a theoretical minor scale key.

> The F natural minor scale sounds the same / contains the same note pitches, which are played in the same order (the scales are enharmonic), so it can be used as a direct replacement for the E-sharp minor scale.

Rather than use a key signature that would in theory contain double sharps or flats, usually the key signature of the replacement minor scale - F, above is used, as shown below. 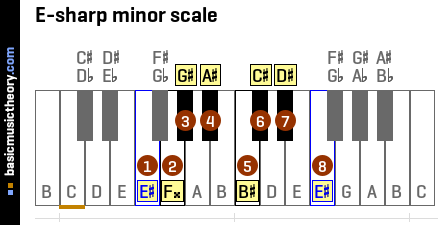 To understand why the E-sharp minor scale has 6 sharps, 1 double-sharp, have a look at the E# major scale page, which shows how to identify the note positions and names for this scale.

This step shows the key signature of the F minor scale, which is enharmonic / contains the same note pitches.

To understand why the F is a direct replacement, compare the piano diagram below to the original key in step 2, noting the same piano keys are used in each case. 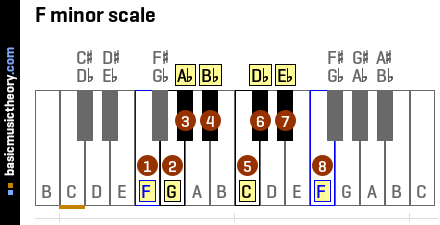