The Solution below shows the A-sharp major deceptive cadence on the piano and treble clef.

This step shows the deceptive cadence in the key of A-sharp major. 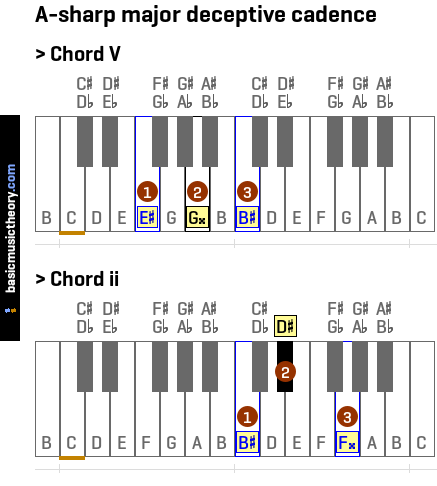 Another example of the deceptive cadence is the motion from the dominant -A# major seventh chord #V7 to A# major triad chord #vi, where the final chord is the relative minor of the first chord.

Before describing the details of the deceptive cadence in the key of A-sharp major, first it would be to useful to identify the scale notes, degrees and chords that could be used in this key.

This step shows the A-sharp major deceptive cadence on the piano and treble clef.

It is less strong than the A# major perfect authentic cadence because the dominant(V) and tonic(I) is the most fundamental diatonic scale degree relationship in western music.